Cats are beautiful feline creatures loved by almost everyone who has a penchant for perfection. Researchers believe that cats were once worshipped as gods in ancient times by some cultures, and were commonly associated with the ancient Egyptian hieroglyphics and drawings. This is the 21st century and it appears that these creatures haven’t forgotten this.

Cats are a cosmopolitan species, meaning that they can be found across much of the world and they’re now taking over the social media space.  Instagram is one of the world’s largest social networks having more than 800 million active users every month liking and sharing over 4.2 billion and 95 million posts per day respectively. Narrowing it down to Instagram, cats among several other adorable animals are growing their fans base at astronomical rates. Some of the most popular animals on Instagram are driving animal lovers crazy with their pictures and videos that go viral almost instantly. Sure, we know that Jiffpom and Doug the Pug are dominating the Instagram space for celebrity dogs, but the cats will not be pushed aside so easily.

The cats on this list are beautiful, cute, adorable and can give these dogs a run for their money.

How and why these cats are more popular than myself is a question that I ask myself every single day. Some of these celebrities have featured in popular movies like Bruno and Mikado in American legal drama Suits, and popular music videos. However, as a cat lover, you probably need to add some of these celebrity cats to your following and below are the 10 most popular celebrity cats for you to follow on Instagram in 2018 and stay up to date with our feline friends: 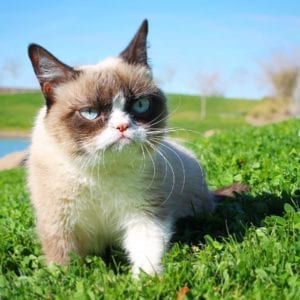 If you’re a fan of memes and funny pictures on the internet, then you must have come across an adorable grumpy-looking cat somewhere. Grumpy (kudos to the owners for this name) became a social media celebrity when she started from the bottom in 2012. She’s so popular that all other cats can only be ‘grumpy’ about her 12.1 million fans in all social networking platforms. Well, with a fanbase that massive, Grumpy’s grumpy days are over. Majority of her Instagram followers are from the United States, the United Kingdom and Canada, and she has a massive 2.2 million fans. I’m not even sure I’ll ever get close to one-twelfth of that in this life and my next 5 reincarnations combined. 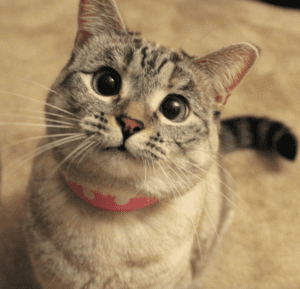 Nala cat is a beautiful cat that we all love and just her name alone is enough to picture how adorable she is. Guess I’m not the only one swayed by her cuteness because she has about 5.9 million fans across all social media channels, and a massive 3.4 million followers on Instagram alone. Majority of her fan base are based in the United States followed by Indonesia and Canada. At a very young age, Nala got separated from her real family but thanks to her current owners, they brought her up in an amazing home. They started to create awareness about healthy animal upbringing on social media, most notably Instagram. She’s also an ambassador for Petfinder helping to educate the public on the importance pet adoption. 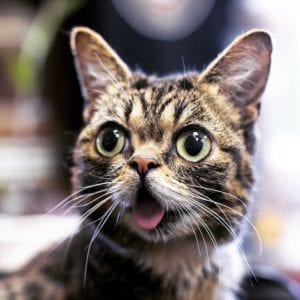 If someone had told me that a cat would someday be a philanthropist, I’d have rolled my eyes in disbelief. Well, Lil Bub has made history. Bub is actively donating money to the American Society for the Prevention of Cruelty to Animals and has raised more than $300,000 since she came into the spotlight. She raised a whooping $105,000 in 2017 alone and Bub owns and runs her own store in the United States and she designs, processes and delivers all the products available in the store. She has a massive 1.8 million followers on Instagram and her fans are loving every bit of her relationship with her owner. 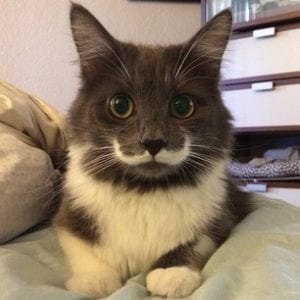 This is an adorable adventurous and fun cat that has a white colored mustache. This has helped transform Hamilton to a social media celebrity. Hamilton resides in the US with his popular mustache and he has more than 813,000 followers on Instagram alone. Majority of his fan base originate from the United States and the United Kingdom. 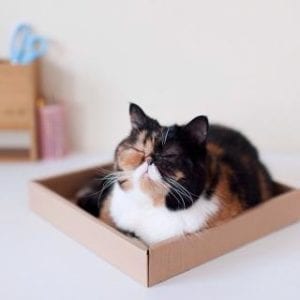 Pudge has featured extensively in a lot of YouTube videos having a huge fanbase of about 1 million dedicated followers. Pudge appears to have a kind of mustache which makes her look interesting and kudos to her owner for realizing her potential and throwing her into the spotlight. She now has about 670,000 followers on Instagram alone and she has worked with so many different brands by featuring in movies and even with music artists like Miley Cyrus. Pudge has a great personality and always keeps her fans entertained on Instagram. 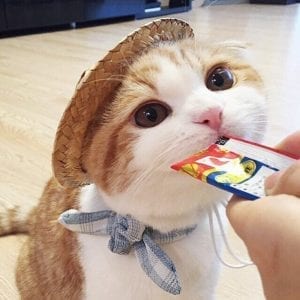 Don’t get the wrong idea, Waffles wasn’t given the name because of his love for Waffles. Everyone thought he was ugly and people refused to adopt him. He was not adopted till he was older. Waffles was unfortunately the only cat left in his litter, until a family who initially came to adopt a dog saw him and fell in love with him. Fast-forward to today and those people who rejected him could never have thought that Waffles would become an Instagram celebrity cat. Waffles is adored by a large social media fanbase with about 500,000 followers on Instagram alone, majority being from the United States. 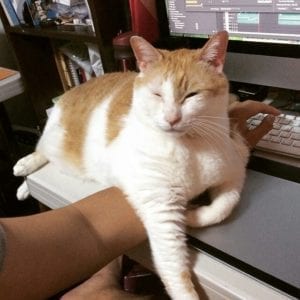 The Fumeancat is a celebrity cat brand living in Thailand. Unlike the other Felids on the list, the name Fumeancats is actually a brand that simply appreciates cats in general and does not refer to a single cat. The brand offers their support to cats by bringing them into the spotlight as lovable and adorable creatures. With about 2.2 million fans across multiple social networks and about 470,000 followers on Instagram alone, they are raking in fans from Taiwan, Malaysia and also from the United States. 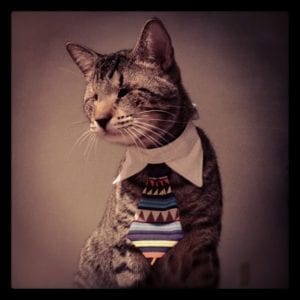 Oskar has over 450,000 followers on Instagram with a majority of his followers spread across the US, UK, and Canada. Oskar and his best pal/owner Klaus spend a lot of time having fun together and they have a children’s book which ships worldwide. 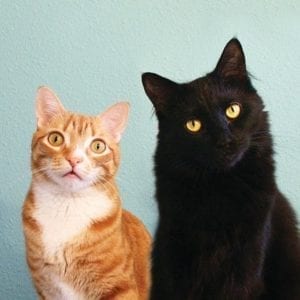 Cole and Marmalade may sound like a cool superhero and sidekick name but unlike your regular superheroes, these two cats are social media influencers. They were both adopted by Chris and they both get on very well. They own and run a website that is designed for their fans to learn how to properly take care of cats. You can learn the right way to wash them, clean them and feed them. They have about 340,000 followers on Instagram with the majority of their fan base from the United States and are more females than males. 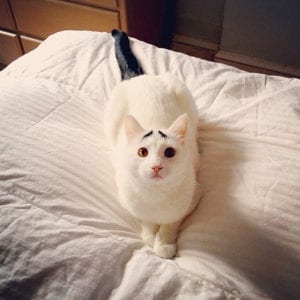 A lot of lost and abandoned animals have been rescued and given new homes, and Sam is another in our list. She was abandoned on the street by her previous owners and she refused to eat or drink water offered by people until she was rescued and taken to a new home where she eventually found love again. Then her new owners created an Instagram account for her and she has now amassed a massive 230,000 Instagram followers.

Now that you’ve seen the 10 most popular cats on Instagram and how these adorable felids are raking in cash for their owners and making enough money from their social media presence, I guess you’re starting to think about the potential your cat has other than sleeping, eating and playing around. Below are the necessary steps to take to transform your cat from couch potato to an Instagram celebrity:

1. Think about what makes your cat unique. People are more likely to get excited seeing something that is new and exciting. If your cat can dance like we’re back in the 60s, capitalize on it. If your cat meows like the siren of an ambulance, that’s what you need.

Finding that special thing that makes your cat standout is what differentiates your Instagram videos from a clip on National Geographic channel.

2. Post consistently. This is a no-brainer. This is one of the major secrets to increase impressions on social media. Like every other social networking platform, posting one, two, or more pictures and videos a day will definitely keep your posts trending on the feeds of your followers increasing chances of getting likes and shares which is the ultimate goal of any Instagram account.

3. Practice taking photos like a boss. When you think about Instagram, the next two things that come to your mind are photos and videos. To succeed on Instagram, you need to become an expert in photography. Take really cool pictures of your cat in funny, cool and charming outfits and watch your followers rise higher than you could ever imagine.

5. Keep Your Instagram Community Engaged. People always want to see more of your adorable cat, probably after a long day’s work. Don’t be stingy with your follows. Follow others who follow you. Take a few moments during the day, every day, to like, share, and comment on accounts of other dogs.

Awww. I totally love Nala! And I am her number one fan who utterly adorable her cute face! She’s so adorable and would surely make a cuddly pet if you ask me.

Yeah. Nala is really adorable and all her pictures are save-worthy. They have her all looking cute and her eyes radiating love. Just the kinda pet just like.

Just like humans, animals also need our love and care. Bub’s owners knew this and so they are helping raise money through Bub for the prevention of cruelty to animals. This is a good cause and I appreciate it.

True, per adoption is important and Nala has really proved that. Imagine if her new owners didn’t take her up. We sure wouldn’t be feasting our eyes on this Instagram beauty. Adopt a pet when you can.

Woah..these are all amazing and adorable cats. I’m already thinking of making my own pet popular. I mean, who wouldn’t want to have a celebrity pet that can fetch you money sometimes. Thanks for the tips.

Yeah, it’s not a big problem to get your pet to become popular on the social media. You just need to identify that cute feature or character of him and you are on your way to creating a celebrity.

Ah. Grumpy cat indeed. Her looks sometimes just fits the name perfectly. I saw her page when a friend liked her photo and I was intrigued. I’ve scrolled through a good number of her pictures and they are all so cute and some funny. Her fan base is quite large and I’m jealous already. Lol.

Great list and great advice. My @cleopatra_fierce_feline has the catitude but not so great at posing for the camera.